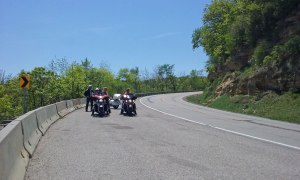 This pullout on Hwy. 60 above Wabasha is a popular stop for bikers.

We haven’t decided where or when our next vacation will take place, but this past weekend was a fantastic chance to get our long-distance riding muscles in shape. With temps in the low 80s and clear blue skies, there was no reason to stay at home!

We rode MN 3 down to Faribault, one of the oldest cities in Minnesota. We latched onto the highway in Inver Grove Heights and had a ball riding the curves around little lakes and not-so-little houses. Farmers were out plowing their fields or moving equipment from one field to another. The air was filled with the fresh scents of newly-turned earth, apple blossoms and lilacs. Magnificent!

After passing through Northfield, we stopped for lunch at Bernie’s in downtown Faribault. I would have liked to have stayed longer and poked my nose into the antique shops, but the day was about the ride. After paying our bill, we saddled up again and headed east out of town on Hwy. 60.

As you leave Faribault, you also leave the flat prairie behind. The countryside begins to roll more, and the road becomes curvier as you approach the Mississippi River and bluff country.  Limestone outcroppings pop up here and there as you pass through Zumbrota, Mazeppa, and Zumbro Falls. As you approach Wabasha, the road climbs upward past the Coffee Mill Golf Course. Suddenly, you look out over the broad river valley below. After a brief stop at the pullout to take a better look, you get back on your bike and swoop into Wabasha.

We spent a good hour at the National Eagle Center learning about eagles and just enjoying the view of the Mississippi from the deck.  Then we climbed aboard our Road King again and crossed the bridge into Wisconsin, where we turned up WI 35 toward home.

It was an absolutely perfect day. The only thing that would have made it better was if I’d put an SD chip in my GoPro camera. It would be so fun show those curves on this page!

We took a ride down Wisconsin 35 this past Labor Day weekend (yes, I know it’s not in Minnesota, but you can see the state from the other side of the Mississippi River). The sun shone brightly in Minneapolis when we left. By the time we crossed over to Prescott, it had disappeared. Fall colors have begun to appear along the river. They added some bright notes to the muted gray atmosphere.

What a change from a week and a half ago, when Ralph and I drove up 35 after a trip following the Mississippi to New Orleans! The air that day was cool and clear, and the bluffs stood out prominently against a blazing blue sky. Summer’s heat was still on, but minus the stifling humidity and high temps that had accompanied us downriver.

Our trip yesterday brought us to Pepin, where author Laura Ingalls Wilder was born (the town celebrates “Laura Days” this coming weekend, September 12-13). We stopped for breakfast at the Homemade Cafe, where everything is made from scratch. It’s a popular stop for bikers and folks who like pie. If you go there, be sure to bring cash. The restaurant does not accept credit cards. We managed to scrape up just enough money between the two of us to pay for our breakfast and leave a very modest tip.

We rode south to Nelson, then re-crossed the Mississippi into Wabasha, Minnesota, where folks are gearing up for a month-long (or is it two?) celebration of Septoberfest. Pumpkins and fall decorations are scattered all over town, including a gauzy Cinderella pumpkin coach near the AmericInn.

Up Hwy. 61 at the entrance to Lake City, we stopped at Pepin Heights Orchards and bought a bag of SweeTango apples and a loaf of their apple fritter bread. The place was packed with apple lovers, and ours was not the only motorcycle in the parking lot. We negotiated the road construction in downtown Red Wing, then went down the road to Welch, just for the ride. The village was crowded as folks scrambled to get one more inner-tube ride down the Cannon River.

There’s a lot of good riding weather ahead. Ride Minnesota, before the snow flies!

It was a perfect last weekend of summer. The sun was bright and warm, the sky blue, the trees just beginning to show some color along the Mississippi River. A great day for a motorcycle ride! Saturday was also the annual Flood Run, which stretches down the Wisconsin side of the river from Prescott to Alma and back up the Minnesota side. We had to be back in town for a wedding later in the afternoon, so we skipped the official run and rode ahead of the pack.

Our kickstand went up at 9 a.m. and we headed east toward Wisconsin. A couple of sport bikes whined past us as we approached the I 94/Hwy. 61 split. I looked at the passengers riding on the back and was glad I wouldn’t have to spend my day hunched over like a certain resident of the Cathedral of Notre Dame. We encountered several bikers en route to the run, and lots of lone wolves like us who just wanted to get out and ride.

The wind was cool on my neck when we started out, but the sun soon penetrated my leather jacket. I found a smile fixing itself to my face. Not a toothy, Teddy Roosevelt grin, but a pair of upward curves tugging at the corners of my mouth.

Motorcyclists were lined up wall-to-wall in Prescott, waiting for the ride to begin. I saw several of them checking out our Victory with its modified pipes as we rumbled up Main Street.

The Wisconsin side of the river offers spectacular views of Lake Pepin. With tall bluffs on one side, the river below and curves ahead, it’s a motorcyclist’s dream road. We pulled over to stretch our legs at the historical marker south of Maiden Rock, where legend has it that a Dakota woman leapt to her death the river below rather than marry a man she didn’t love. My great-grandmother painted a picture of Maiden Rock about 100 years ago. It hangs in my office.

Traffic remained light as we cruised through Pepin, where a local youth event was taking place. We continued on to Nelson, where the Chippewa River meets Old Man River. We made a right turn and crossed several bridges through the backwaters of the Upper Mississippi National Wildlife Refuge and returned to Minnesota via Wabasha.

Septoberfest is on for the next few weekends, and Wabasha is all decked out in candy corn colors. There were all kinds of activities going on under the bridge, but we preferred to enjoy coffee and chocolate at Big Jo Espresso, where we sat out on the back deck and watched a bald eagle swoop in off the river.

We followed the river back home. Sailboats  ran ahead of the wind on Lake Pepin, and large pleasure boats began to appear on the water. We met a large contingent of motorcycle riders on the curves between Lake City and Red Wing and gave them all a friendly greeting. It’s good to be alive!

Snow fell earlier this week, pretty much ending the motorcycle season for most sane riders. There are still a few diehards out there dodging the slick piles of leaves (the trees are finally letting go!) and braving the cold winds. On Tuesday, when the evening commute was accompanied by a mist of snowflakes, I passed a woman riding primly on a scooter. She wore a visor-less helmet and had a lap robe draped across her knees. The fringe tossed in the soggy wind. She looked like a granny minus her rocker. She had to be uncomfortable.

I just received a notice from the Hosanna! Bikers were cancelling their November ride because of the weather. Time to batten down the hatches.

Ralph and I celebrated our October wedding anniversary with a ride along the Mississippi River to Reads Landing, where we had lunch at Reads Landing Brewing Company (great sandwiches, local beer). The trees were just beinning to turn color then, and the weather was a little on the cool side, but not uncomfortable. If you had told me 34 years ago that I’d be riding on the back of a bike at age 60, I would have laughed my head off. Now there are times when I’d like to make it a way of life.

After lunch we drove a couple of miles further south to Wabasha and crossed the river to Wisconsin. We were immediately passed by a posse of crotch rocket dudes. Heads down, speeding through the curves, they clearly weren’t interested in the changing leaves or the tall limestone bluffs along the highway.  Time will come when their testosterone levels drop and they’ll want to slow down and actually see where they’re going. By then, maybe, they’ll be ready for a book like Ride Minnesota.

October was a good month for the book. I sold 21 copies in one day at the Twin Cities Book Festival.  The owner of SubText Books in St. Paul dropped by and said she wanted to sell the book in her store.  And I learned the name of another place in Cambridge that may be interested in carrying it. The following weekend was not quite as successful–I sold just 13 copies at the Home Improvement & Design Expo.  But that’s more than I would have sold had I stayed home. And, I learned about a Dunn Bros. Coffee initiate called coffeeandbooks.com that I have to check into a little more thoroughly. The month ended with word that Hennepin County Libraries had ordered the book. 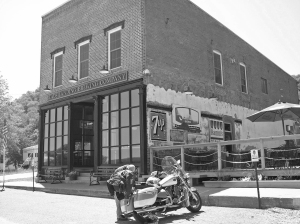