People often ask me if Ride Minnesota is available in bookstores. The short answer is, “No.” In a bookstore, it’s just another book. That’s why my marketing efforts are trained toward the places bikers go–motorcycle dealers, biker bars, coffee shops. When I purchased publishing services through Amazon’s CreateSpace division, however, I did buy the expanded distribution package.

A check with TopTenReviews.com brought up the names of nine online booksellers which the website listed as the “best.” I’m happy to say that Ride Minnesota is available through Amazon, Barnes & Noble, AbeBooks, BooksAMillion, Alibris, Biblio (which says it has 107 copies on hand), Powells and TatteredCover.

The book has done fairly well on Amazon. Maybe with a little push of these outlets, they’ll start getting orders, too.

The weather here in Minnesota is drying out. Time to ride!

This is a do-over. I unintentionally hit the publish button in the quick publish mode. I will not use that mode again!

As I was saying, riding with a group of motorcyclists is fun, but I also find it confining. It’s a lot of work keeping track of the rider ahead of you, the guy on the side and the ones following (even though I’m not driving!). More so than in a car. And, of course, you end up sniffing a lot of motorcycle exhaust.

That’s why Ralph and I like exploring on our own, discovering hills and valleys, curves and straight-aways, new sights, new sounds, fresh air. Just us. That’s how I came to write and publish Ride Minnesota

, to share our experiences other motorcyclists who want to get out and explore Minnesota. There are a lot of interesting places in this state, and we haven’t seem ’em all–yet.

I’ll be at Motoprimo in Lakeville tomorrow afternoon, in conjunction with the Victory Demo Truck Tour. I’ll have copies of Ride Minnesota on hand, ready to sign and purchase. Come and see me!

Tags: and yet they're so confining. You have to follow the leader, but it feels more crowded, Exploring Minnesota, Group motorcycle rides are fun, Lakeville, Minnesota, Motoprimo Motorsports, motorcyclists, really, Ride Minnesota, somehow. A lot of concentration going on there!, to the side and the rear. Not much different from driving a car, you have to watch the biker in front of you

The Blessing of the Bikes

If you don’t believe in God, ride a motorcyle. Seriously. Because when you’re on a bike, you’ll find occasions to talk to a higher power. Take today, for instance.

We joined the Hosanna! Bikers today for the 20th annual Blessing of the Bikes. We met at Hosanna! Lutheran’s sprawling parking lot. Pastor Mike Swecker gave us a prayer and sent us on our way. I didn’t count the bikes, but there had to be at least 100.

We were headed south on MN3, making a left turn onto the Vermilion River Valley Road.  A long stream of bikers is hard to miss. Nevertheless, as we headed into the turn, a man in a blue SUV made it very clear: he. wasn’t. going.to.stop.  He bore right down upon us and didn’t even slow down! Ralph and I were directly in his path. I looked straight into the cab of his vehicle and his expressionless face told me he wouldn’t mind tiddly-winking a biker or two onto the highway. Somehow, by the grace of God, all of us made it.

“Jesus Martha!” were the first words out of my mouth, followed by “Thank you, God.”

The rest of the ride meandered pleasantly around the Cannon Falls area. The highlight of the trip was the dead end in which we circled around 20-ft. diameter grove of trees and headed back to Lakeville.

Back at the church, we listened to the Daisy Dillman Band (how did I live through the ’80s and not hear them before this?), ate hotdogs and had our Victory prayed over by members of the Christian Motorcyclists Association. Oh, and I sold four copies of Ride Minnesota. Thank you, God. It was a good day. 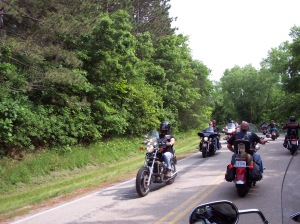 We literally met ourselves coming and going!

Looking Forward to the Weekend

It was a long winter. Then monsoon season. Now we’re pretty close to summer and it’s time to ride!  Today is a gorgeous day. I hope the weather holds for the Blessing of the Bikes at Hosanna! Lutheran Church this Saturday. If it’s half-way decent, I’m sure the motorcycle crowd will be there.  Ralph and I are going to be there, taking orders for Ride Minnesota, listening to the Daisy Dillman Band and, I hope, going on the ride.

Two Sundays ago, we rode up to St. Cloud to join a ride that benefitted the St. Cloud Children’s Home. We paid $10 each to participate (the money from the wristbands went to the home), and had a wonderful chicken dinner at Shortstop. Then everyone jumped on their bikes and we rumbled decorously through St. Cloud. It was a gorgeous day–one of those perfect Minnesota days–with lots of blue sky and a few puffy clouds. Lilacs were in full bloom along the highways, and their scent wafted over the green earth.

Before hitting the backroads, the group rolled through the grounds of the children’s home to let the kids have a look at all the bikes. Unfortunately, there didn’t seem to be many kids around to view this spectacle. The guy on the Harley next to us was forced to drop out when the drive belt on his motorcycle suddenly broke. Thank God, this happened at 15 mph instead of 60 on the highway. He was able to pull out of line without causing any trouble.

We rode the curves and hills with the group until we got to Orrock. Ralph wasn’t feeling well–it turned out to be pneumonia–and we were half-way home, so we decided to ride Hwy. 47 back to the Twin Cities rather than return to St. Cloud.

I haven’t heard how much money the ride generated. It gave me and Ralph a chance to see a part of the state that we haven’t spent much time in.  We’ll have to go back and explore it more thoroughly.

Here’s to good weather on Saturday!