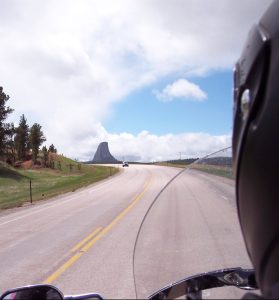 The road to Devils Tower, Wyoming

It’s what you get after spending seven to ten days riding a motorcycle. Similar to jet lag, it persists for a couple of days after you park the bike in the garage. The sound of an open throttle brings it all back — the wind, leaning into a curve, the hum of a well-tuned engine, the vibrations under the foot pegs.

Traveling by motorcycle is far better than going by plane. There are no TSA inspection lines. No two-hour waits at the airport. You just get on the bike and go.

We just returned from a trip to the Black Hills of South Dakota. It’s early; motorcyclists were few and far between. So were the other tourists, in fact. Compared to a sunny day in July, the viewing plaza at Mt. Rushmore was practically empty. And we had many roads all to ourselves. A great way to get away from meetings, deadlines and political debates. In a couple of months, Spearfish Canyon and the roads leading to Sturgis will be filled with the rumble of Harleys, Victories, Hondas BMWs.

By then, I’ll be well over my motorcycle lag and ready for more adventures. The motorcycle season is open! Get out and Ride Minnesota!