Stay safe out there!

I can’t tell you how many times we’ve been passed by dudes on crotch rockets who must have a crystal ball mounted to their windshields.

Why do “crotch rocket” riders have such a sense of entitlement and immortality? Their need for speed so often overrules common sense, it’s a wonder more of them aren’t scraped off the pavement each summer.

I edit a neighborhood newspaper. Last night was absolutely beautiful, the kind of evening Minnesotans store in their memory banks for cold winter nights. The air was balmy, and the sweet scent of apple blossoms and lilacs filled the air. I had a neighborhood meeting to cover for the paper. It was only six blocks from home, so I decided to walk.

There was one busy thoroughfare on my walk. It’s T-shaped. Normally, I hate to wait for the “walk” button to change the lights, but last night I pushed it. Good thing. Just as I stepped from the curb, three screeching crotch rockets came roaring down the long leg of the T.  The light was red for them. One of them checked for oncoming traffic to his right, but no one checked for the pedestrian on the left. As they roared through the light, I jumped back onto the sidewalk and yelled, “Assholes!” One of them turned back toward me and flipped me off. I silently wished he’d lose control of his bike, but it didn’t happen.

The previous day, I was sitting in a meeting at the newspaper office, which has a big window overlooking a very busy street. Suddenly two sport bikes came up close behind a car in front of them. They veered, one to the left, the other to the right, and passed the car.  My kingdom for a patrol car at that minute!

On more than one occasion, Ralph and I have ridden the Great River Road on the Wisconsin side. There are some blind curves, especially on the lower end near the southern Wisconsin border. I can’t tell you how many times we’ve been passed by dudes on crotch rockets who must have a crystal ball mounted to their windshields. They’re a menace!

Motorcyclists have enough to worry about with semis, people who change lanes without signaling and drivers who don’t “see” motorcycles, much less fellow bikers who don’t give a damn about anyone but themselves.

When I went to bed last night, I could hear the whiny, mosquito-like windup of a crotch rocket shifting gears on I-35. Stay safe.

I hate my helmet 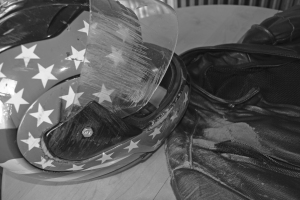 I’m not very fond of my DOT-approved motorcycle helmet. It’s heavy, the foam padding is scratchy, and sometimes the visor makes me feel like I’m in a cage. Yet, even though Minnesota law requires helmets only for people 17 years old or younger, I still wear it.

I was discussing motorcycling with my eye doctor (he’s an avid biker) during my last visit to his office.  He asked if I wore a helmet and I said yes. He nodded his head. “Me, too,” he said.  “After all it’s your brain!”

There was an excellent commentary by Darrell Brandt in the Minneapolis Star Tribune last week about wearing helmet while riding. There’s a saying among bikers: “If you haven’t dumped your motorcycle, you will. It’s just a matter of time”.  Brandt argues that the same is true for needing helmets, and I’d have to agree.

We’ve had to drop our Victory a couple of times in our journeys around Minnesota and Canada. One time I ended up on my back with my head resting on the pavement. Thank goodnesss for that heavy, scratchy helmet!

The photo in this post shows Ralph’s helmet and jacket after an “up close and personal” encounter with the concrete on I-35 in downtown Minneapolis. He was only doing 35 mph at the time.